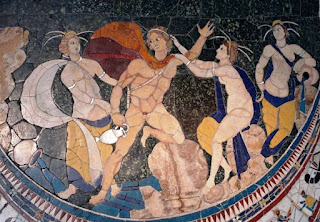 Lupercalia was an ancient, possibly pre-Roman pastoral annual festival, observed in the city of Rome between February 13 and February 15, to avert evil spirits and purify the city, releasing health and fertility. Lupercalia was also called dies Februatus, after the instruments of purification called februa, which gave February (Februarius) its name.

Feasting began after the ritual sacrifice. When the feast of Lupercal was over, the Luperci cut strips, also called thongs or februa, of goat hide from the newly-sacrificed goats. They then ran naked or nearly-naked around Palantine whipping any woman within striking distance with the thongs. Many women welcomed the lashes and even bared their skin to receive the fertility consecration.
Saint Valentine’s reputation as a “patron of lovers,” he became synonymous with romance. In the late 5th century A.D., Pope Gelasius I eliminated the pagan celebration of Lupercalia and declared February 14 a day to celebrate the martyrdom of Saint Valentine instead.
Posted by A Southern Horror Fan