Greg Nicotero shared the first photo from the first episode of 'Creepshow' reboot, which recently wrapped production. The series returns on AMC's streaming service Shudder. Check the image below. 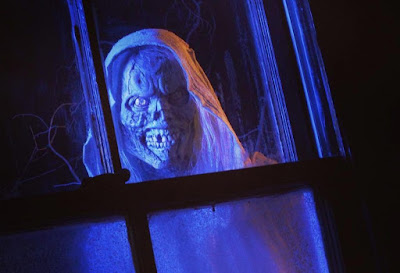 Shudder, AMC Networks’ premium streaming service for thriller, suspense and horror, announced today that production has begun on its first long-form original TV series, Creepshow, in Atlanta, GA. Executive produced by The Walking Dead’s Greg Nicotero, the horror series is based on the iconic 1982 anthology film written by Stephen King and directed by George A. Romero.

The six-episode season will feature an adaptation of an as-yet unannounced Stephen King story, as well as segments based on stories by other award-winning and acclaimed horror writers, including:

● “By the Silvery Waters of Lake Champlain” by Joe Hill (NOS4A2)
● “House of the Head” by Josh Malerman (Bird Box)
● “The Companion” by Joe Lansdale (The Bottoms)
● “The Man in the Suitcase” by Christopher Buehlman (The Lesser Dead)
● “All Hallows Eve” by Bruce Jones (The Hitchhiker)
● “Night of the Paw” by John Esposito (The Walking Dead: Webisodes)
● “Bad Wolf Down” by Rob Schrab (Monster House)