My Review Of "Fighting The Sky" 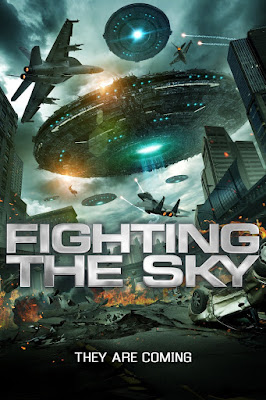 "Fighting The Sky" has a standard "It Came From Outer Space", story that plays along similar lines as "Dark Skies". It does manage to string together a pretty neat story from the many ideas ripped from classic scifi tropes. It does lack originality,and at times the pace falls flat when dialog heavy scenes seem clunky and forced.

The acting bounces from hokey and below B level to some truly cool moments that give a level of quality to the film. Notably Cole, stands out as a strong performer. The overall storyline is a good concept and for reasoning Faraj has created a cool little first contact, alien tale. Still,  there is plenty wrong,  making it a film to either dedicate ones' time to it, or just get stoned and let it happen.

The creature design is a unique choice , and the CGI was well done. At first the aliens made me whence,  but stayed with it and it works because not all aliens are the same. Right?! The cinematography is excellent and the cast get their groove at the halfway mark so the story amps up. Overall "Fighting The Sky" won't appeal to everyone,  this isn't high level effects mayhem like "The Fifth Wave", but the indie vibe,  and recognizable cast make it worth checking out. (2.5/5)
Posted by A Southern Horror Fan