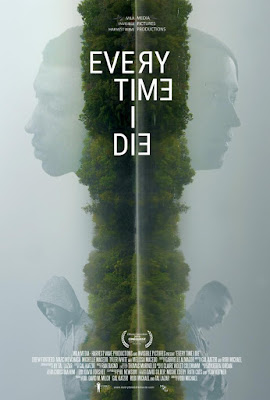 Robi Michael’s Every Time I Die Lands World Premieres at Cinequest
His Grisly Murder is Just the Beginning for Sam ; Troubled Man Wakes Up in the Bodies of his Friends

MiLa Media and Invisible Pictures have announced the World Premiere of Robi Michael’s Every Time I Die at the 2019 Cinequest Film & Creativity Festival. The film follows the classic tale of ghost possession, flipping the script by telling the story from the perspective of the possessing spirit trying to stop his killer from striking again. Every Time I Die will premiere at Cinequest at the California Theatre San Jose March 8th.

Drew Fonteiro (“Good Trouble”) headlines the cast as a disturbed young man with a mysterious past whose tragic death is just the beginning of his troubles. Instead of the hereafter, he finds himself trying to protect his friends from inside their bodies. Fonteiro is joined by Marc Menchaca (“Ozark”, “The Sinner”), Michelle and Melissa Macedo (“Girlboss”, “One Day”), and Tyler White. Robi Michael directed and produced from a script he wrote with Gal Katzir, alongside producers David Milch and Tal Lazar.
Sam falls in love with Mia, but she’s already married. In his attempts to win her love, he’s murdered on the shores of a lake. However, his consciousness does not die. Instead, he finds himself inhabiting his friend’s body. Now, he will need to stop his killer from murdering him again. In the process, his dark past will unravel and he might find out why he’s doomed to never let go of life.