My Review Of "Blood Bound" 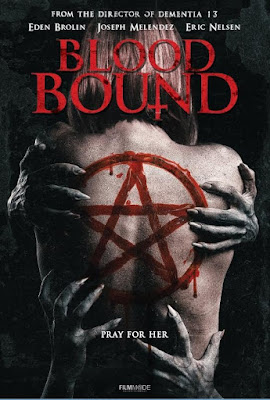 "Blood Bound" is a supernatural thriller from director Richard LeMay. It stars Joseph Melendez, Eden Brolin, Rosa Arredondo, Gerald McCullouch, and Vanessa Rubio. Bound to an ancient pact, a family of unlimited power descend upon a small rural town to sacrifice 4 human lives, one being a member of their own family.

Every 25 years, it begins. Bound to an ancient pact, a family of unlimited power descends upon a small rural town to sacrifice four human lives, one being a member of their own family. This Rosemary’s Baby meets Drag Me to Hell thriller takes a dark look into how far the human spirit can take one soul in it’s most desperate hour.

"Blood Bound" is a weighted story, with family dynamics, personal conflict, and social complexities. On the surface it is a story about the occult, and overcoming supernatural evil. But to its depth it is a character melodrama pitting self identity against clan mentality. And aesthetically the juxtaposition between backdrops of scenic beauty against such dark and damaged characters is total arthouse.

At the beginning the story falters near to being forced,  or convoluted. However it merely teeters there as characters become more developed and recognizable. It is mixed with some moments of quality acting and captivating storytelling. "Blood Bound" feels indie and at times it felt like a Lifetime movie, you know- the creepy kind they play during the Halloween season. I did keep asking "where's the horror"?!

There is some horror in the film but it comes nearly an hour into the story. The supernatural elements are slightly weak,  mostly coming off as "make-believe". They seem too understated. The occult aspects beyond that are done nicely, and really give into the witchy vibe that LeMay is going for. Overall "Blood Bound" fails to gain any major ground as far as the horror,  but the story is a good one and the film is worth checking out. (2.5/5)
Posted by A Southern Horror Fan