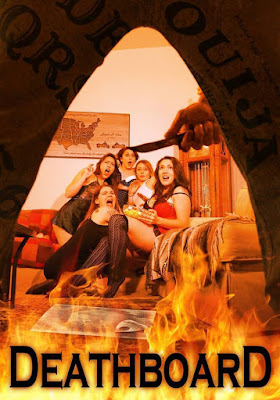 Fuzzy Monkey Films was started in 2014 by filmmaker Brad Twigg. Since then we have produced nearly 20 feature films and anthology segments including “Wrestlemassacre”, “Killer Campout”, “Brutality”, and “The Grindsploitation Series”. Our films have received national distribution from companies like Wild Eye Releasing, Troma Entertainment, Worldwide Multimedia and SRS Cinema. We make horror films for horror fans by horror fans and that’s always been our mission from the start. We want to take fans back to the glory days of the 80’s when horror movies were fun and not riddled with CGI and remakes.


We’ve already started production on our newest movie entitled Deathboard, but we need your support to finish it. In the film Valerie buys a house with a gruesome past. Four of her friends come over to help her move in and have a housewarming party. After a strange encounter with a creepy neighbor, the ladies discover an old Ouija board in the basement and unwittingly unleash a horrifying evil. Can they survive the night?
Your contributions will help us cover special makeup effects, talent, wardrobe, camera equipment, travel, lodging, food, promotions, marketing and more. In return we’re offering some awesome perks like signed and numbered limited edition DVD’s, posters, signed screen used props, associate and executive producer credits and more!
https://www.indiegogo.com/projects/deathboard-horror-feature-film/x/2008895?fbclid=IwAR3Gu3ZzgQcOwk7MtI1BAaEVC4Qmle5lA95bIVjkIboIo_634-_TFM94rhs#/
Posted by A Southern Horror Fan