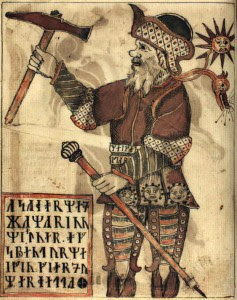 Þorrablót is an Icelandic midwinter festival, named for the month of Þorri of the historical Icelandic calendar (corresponding to mid January to mid February). The Þorrablót is an evening with dinner where participants hold speeches and recite poems, originally to honour the Norse god Thor (Þórr), whose name is taken to be associated with Þorri. Calling the feast a blót (a feast held in honor of a god in Norse paganism) makes clear the reference to pagan times, which many nationalists of the 19th century considered a golden age of Icelandic history.

The Thorrablot celebration starts with dinner. For the midwinter feast, Icelanders serve what was normal day-to-day food for Vikings, and turn back to nature-made food that is smoked, laid in mysa (a sour milk-product), salted, dried, or kaestur (rotting and setting meat). The things you can expect to see on your plate or on the buffet table include local dishes such as fermented shark, smoked lamb's meat, sour lamb breast, liver wurst and blood sausage, rye and flat breads, as well as dried fish. All of that is washed down with a shot of Brennivin (Iceland's strong schnapps).


After the Thorrablot dinner, get ready for group games and old songs and stories, accompanied by Brennivin. It'll definitely get that rotten meat taste out of your mouth. Later in the evening, dances start and often continue until the early morning when Thorrablot celebrations draw to an end.
Posted by A Southern Horror Fan