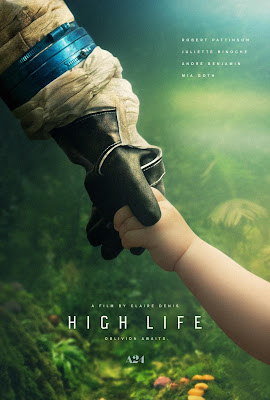 The official trailer has been released for Claire Denis' Scifi thriller "High Life". The film stars Robert Pattinson, Juliette Binoche, André Benjamin, and Mia Goth. A24 has plans on a April 12th release for the film.

Monte (Robert Pattinson) and his baby daughter are the last survivors of a damned and dangerous mission to deep space. The crew—death-row inmates led by a doctor (Juliette Binoche) with sinister motives—has vanished. As the mystery of what happened onboard the ship is unraveled, father and daughter must rely on each other to survive as they hurtle toward the oblivion of a black hole.