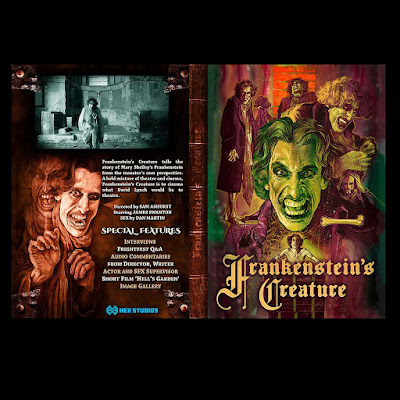 The film, directed by Sam Ashurst and starring James Swanton, is a retelling of Shelley's classic story from the perspective of the monster. Shot in a single take, Frankenstein's Creature features a powerhouse performance by Swanton, who, as well as being the film's sole performer, also scripted the project.

Award-winning filmmaker Sam Ashurst has combined theatre and cinema to bring to life this bold, original, but ultimately faithful take on the much-loved story, and its innovative style and classic inspirations make it a perfect fit for the Hex Studios label.

Speaking about the release, Ashurst says “I’m really proud that Frankenstein’s Creature has found a home at Hex Studios. Sarah, Lawrie and Michael have created a studio that combines arthouse and grindhouse in a really exciting way, using the same kind of classic influences that inspired our film. And they share my love for Graham Humphreys! I’m hoping that, through Hex, a passionate audience of film fans will find and fall in love with James Swanton’s astonishing tribute to Mary Shelley’s classic novel - it’ll certainly be unlike anything they’ve ever seen before.”

Scottish genre outfit Hex Studios have picked up the arthouse horror for an exclusive edition of 200 copies, a nod to the recent 200 year anniversary of Shelley's novel. The special edition is available for pre-order now from the Hex Studios website, with a release date of March 18th.