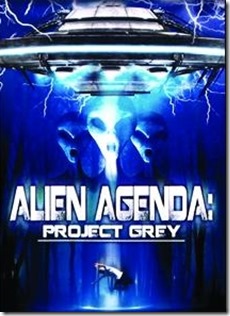 “Alien Agenda: Project Grey” is a sci-fi/horror film directed by Christian Blaze and Crystal-Dawn Rosales. The film stars Christian Blaze, Justin Stillwell, Allison Warnyca and T.J. Riley. “Project Grey” tells the story of four friends who go away for some weekend fun at a secluded cabin by a lake. It is a tale of psychological terror where fear rules the agenda as aliens seek to manipulate and experiment on one of the young weekenders. The film first released in 2007 and has now found it’s home at Reality Entertainment.

“Alien Agenda: Project Grey” is a story that blurs the line between what is real and what it delusion as it opens to a criminally insane patient talking about his experience with a Dr. Schroder. This film deals with every thing from mind control, government conspiracy, Russian military and alien abduction in a very twisted and thin plot that is barely maintained. The movie does manage to express an almost surreal atmosphere steeped in despair when playing the different possible scenarios. Trust me there are a few plots playing out in this movie. Even if it is weak and seems to be made up on the spot throughout the film it does managed to hold together long enough for the surprise twist at the end. ( A twist that you can figure out about half way through the story.) The Russian military subplot is almost lost in this film and seems as if it were added as an after thought. That aside the story of the four vacationers is deep and emotional and filled with melodrama that held my attention.

In the end “Alien Agenda; Project Grey” seems to be a film that needed more thought and time to mature before production began but none the less it manages to tell a decent story. Unfortunately there was not much else within the film that backed this fact up. The acting was less than amateurish and seems convoluted. The special effects where the big “wow” is concerned (the aliens) is so cheap and CGI that it seems cartoonish and lame. Anyone seeking to watch this movie should go in with very little expectation in order to make it all the way through. With that in mind then see the movie if you're set on it but skip it otherwise.
Posted by A Southern Horror Fan