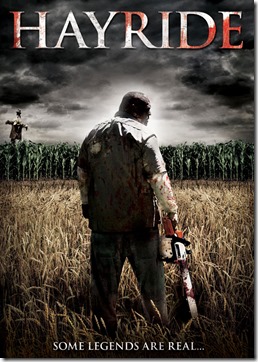 Terron R. Parsons’ “Hayride” hits DVD and Redbox this May. Midnight Releasing will take you to the deep south for a tale of terror on May 7th 2013, along with a Redbox release. Filmed in Southern Alabama, “Hayride” is loosely based on a childhood experience of the director whose family would hold an annual Haunted hayride attraction. The film stars  Sherri Eakin, Jeremy Ivy and Richard Tyson. The story follows a college kid who returns home and is forced to deal with a real life horror as an escaped killer takes refuge in the family’s haunted hayride attraction.

Steven Summers returns home to southern Alabama from college with his girlfriend, Amanda, to attend his uncle's annual Haunted Hayride. Unaware that an escaped killer is on the loose, Steven will soon face the real life embodiment of PITCHFORK, a character his uncle created for the Hayride and Steven's childhood tormentor. Steven will soon realize that not all childhood fears are imagined when the legend of Pitchfork suddenly becomes dangerously real...