Prepare For The Release Of “All American Zombie Drugs” 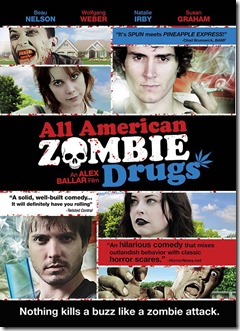 “All American Zombie Drugs” is an Indie flick that will hit DVD shelves on April 23rd thanks to Midnight Releasing. The film is directed by Alex Ballar and will also be available on major Cable & Internet VOD on June 23rd. AAZD stars Beau Nelson, Wolfgang Weber, Susan Graham and Natalie Irby.

The DVD will be available at Blockbuster and a number of other retail and rental chains, and in June the movie will be available on iN DEMAND (Cable) and all major internet platforms such as iTunes, Vudu, Amazon Instant Video, Google Play and more.

All American Zombie Drugs is an indie comedy hailed by critics for its uniqueness in bringing together a number of genres into an hilarious, poignant story. Vinny and Sebastion, two burnouts going nowhere in small town suburbia and still riding the high of their high school days, start a business doing the only thing they have ever excelled at… Drugs. With the help of a jealous girlfriend and a rich Goth chick, Vinny and Sebastion take on angry, geeky frat-boys, dangerous businessmen, zombies and more in search of the perfect high.”