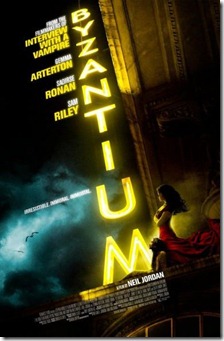 The trailer for the vampire action drama “Byzantium” has been released. It packs in a visual and emotional overload of the melodrama that the star characters are plagued with. Directed by Neil Jordon the film stars Gemma Arterton, Saoirse Ronan, Jonny Lee Miller, Caleb Landry Jones, Sam Riley, Tom Hollander, Christine Marzano and Daniel Mays. It is an impressive cast with major production value. I am eager to see this film mostly because of the powerful acting ability of young Saoirse Ronan who’s “Hanna” had me glued to the screen from beginning to end.

Two mysterious women seek refuge in a run-down coastal resort. Clara meets lonely Noel, who provides shelter in his deserted guesthouse, Byzantium. Schoolgirl Eleanor befriends Frank and tells him their lethal secret. They were born 200 years ago and survive on human blood. As knowledge of their secret spreads, their past catches up on them with deathly consequence.