Check out this teaser poster for David R. WIlliam’s Lovecraftian horror/drama “Manifestation”. The film is set to star Horror legend Michael Berryman, Melantha Blackthorne, Debra Lamb and Robert "Bob" Bozek. The story is an exploration of the disintegration of a marriage following the death of the couple’s only child. The couple’s guilt, grief and anguish are so powerful they manifest themselves into a terrifying and vengeful physical entity. The couple must confront this manifestation to achieve a form of closure. The film is described as visceral and a blended exploration into Horror Artsploitation. Head over to the Kickstarter page also to see the cool rewards for helping see this project to fruition.

Read the complete story the hit the highlights to show some love! 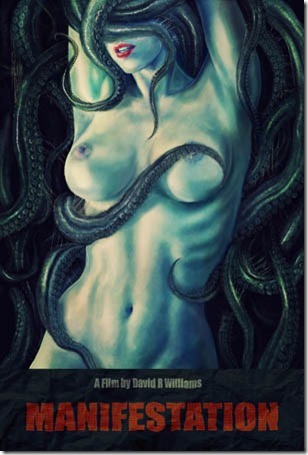 The Story
Manifestation can be described as Kramer vs Kramer meets H.R Giger (designer of Alien) or Who's Afraid of Virginia Woolf if written by H.P. Lovecraft...with just a touch of Clive Barker.
On the anniversary of the death of their six year old son, Bob pays a visit to his estranged wife Anna hoping to heal their still open emotional wounds.
Their meeting quickly disintegrates into a raging scream-fest as all their suppressed pain and angry pour out and both sink into even deeper rings of emotional hell.

All is energy...even emotion...and energy cannot be destroyed, only changed. Where does hate go once released? Where does heart-rending sorrow, the overwhelming sense of loss, the reptilian drive to exact bloody revenge go once these emotions leave the body? What form might they manifest?

Manifestation takes place in a world that exists at the edge of darkness; worlds of eternal twilight where deeply troubled individuals struggle to make sense of the horrors of their lives, seeking to catch a glimpse of the long rumored light at the end of the tunnel.

But what if what stands between them and the light is the darkness itself?

"....Others were drawn from darker and more furtively whispered cycles of subterranean legend—black, formless Tsathoggua, many-tentacled Cthulhu...and other rumoured blasphemies from forbidden books like the Necronomicon, (or) the Book of Eibon...."