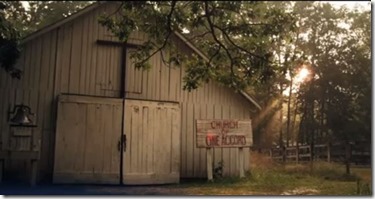 Check out the trailer for “Holy Ghost People”. The film focuses on a religious sect of snake handlers. Nineteen-year old Charlotte enlists the help of alcoholic ex-Marine Wayne to find her estranged sister who has gone missing deep in the Appalachian Mountains. Their search leads them to the Church of One Accord and an enigmatic snake-handling preacher named Brother Billy, who's devoted congregation of outcasts knowingly risk injury or death seeking salvation in the Holy Ghost. What Wayne and Charlotte uncover during their time on the mountain - about themselves and the nature of faith - will shake them to their core, as the mystery of Charlotte's sister and her fate unravel. Directed by Mitchell Altieri and starring Emma Greenwell, Joe Egender, Brendan McCarthy, Cameron Richardson and Roger Aaron Brown. “Holy Ghost People” is set to premiere at next week’s SXSW Film Festival in Austin, Texas.