My Review Of “Death By VHS” Anthology 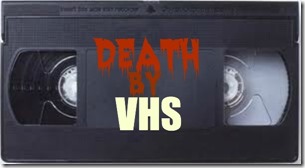 “Death By VHS” is a new anthology from Indie film maker and horror host Walter Ruether a.k.a. Scarlet Fry. The collection of horror/ gore shorts are unique and creative spins on classic moral tales from twisted minds. A battered VHS and a small bounty of cassettes create a reality unlike any that Ruether has brought to life ever before, from reunions of the undead to a killer Krampus the low budget stories cover it all. Completed by a bizarre and clever wrap around that involves tweekers looking for a better high that is said to come from experiencing the stories captured on the cassettes, “Death By VHS” proves to be Walter Ruether’s best work yet.

The stories in this anthology are all cool low budget shorts that are filled with dark humor and plenty of gore. The plots are simple and straight forward moral tales save “Lepus”. I don’t know what that was but it was so much fun to watch. I felt like I was in some twisted world mixed of 60’s acid dream theatre and Adult Swim psychotica. The production value is pretty low in the anthology but the shorts are so much gruesome fun to watch that it doesn’t matter. “Death By VHS” is a totally cheap and trashy delight that celebrates everything great about those gory days of VHS. This is by far my favorite of Walter Ruether’s films!
Posted by A Southern Horror Fan

Thank you for the kind words about the Lepus short. We really appreciate it.