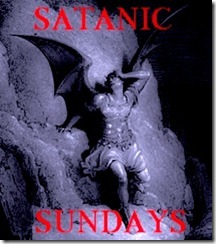 Today is of course Satanic Sundays! Sunday and time for a short list of truly devilish delights to feast upon on this unholy day. A day of unrest, when hearts are black and the sky is red. A deeply disturbing and dark apocalyptic folly of a life supernatural.

“Satanis: The Devil’s Mass” is a 1970’s documentary about the Church Of Satan established by Anton LaVey. Filmed in the infamous ‘Black House’. You can not truly have an appreciation for cult films that embellish the Satanic unless you experience it through the very real world of  the dark followers. This is an interesting film and so is the Satanic Bible. I read it and held a copy for so many years but my deeper Buddhist rejected the teachings.

Juliet Mills plays a young pregnant woman in San Francisco who is going to have the devil's baby during her strange possession. Richard Johnson shows up to help her... but what does he really want? Directed by Ovidio G. Assonitis and Robert Barrett. “Beyond The Door” stars Juliet Mills, Richard Johnson and Gabriele Lavia.

Harry Angel has a new case, to find a man called Johnny Favourite. Except things aren't quite that simple, and Johnny doesn't want to be found. Let's just say that, amongst the period detail and beautiful scenery, it all gets really, really nasty. “Angel Heart” is directed by Alan Parker and stars Mickey Rourke, Robert De Niro and Lisa Bonet. This film gives you the cult of personality with really cool 80’s stars (some who have fallen) and another topic which I find fascinating-voodoo.

Directed by Carl Schultz and starring Demi Moore and Michael Biehn “The Seventh Sign” is probably one of the coolest classic films that tries to play out The Book Of Revelations from the Christian viewpoint without being preachy. Around the world, the signs of the apocalypse--as outlined in the Book of Revelation--seem to be coming to pass in the wake of a mysterious wanderer. Father Lucci, the Vatican Emissary assigned to investigate, dismisses the occurrences as natural, but Abby Quinn, a young American woman, has reason to fear they're real--and that the unfolding events may spell disaster for her unborn child.

A young man,Patrick Channing,born out of an incestuous relationship, and enduring an emotionally ,psychologically scarring childhood, gives in to the dark side of Satanic forces and becomes a weapon of evil. He kills with such ferocity that he becomes the main target of the L.A.P.D. Detective Russell Logan(a specialist in catching serial killers) engages in a battle of wits with Channing in life and after death. It appears that Channing can't be stopped,but Logan has a few tricks of his own to match Channing's-"First Power". Remember when Lou Diamond Phillips was a hot ticket in Hollywood? This film was at the height of that starburst moment. Directed by Robert Resnikoff and also starring Tracey Griffith and Jeff Kober (The Rage). 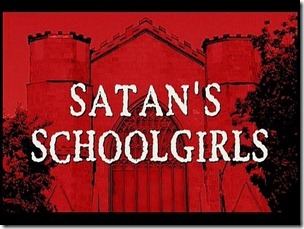 Directed by Ted W. Crestview and starring J. Scott Green, Suzi Lorraine and Kerri Taylor. When seemingly well-intentioned Father Thomas signs on for a quiet summer school session at a rustic school for girls in the country, he gets more than he bargained for. Once inside, Father Thomas has his hands full dealing with four seriously troubled young girls each with a taste for lust, and strict Sister Helen - a disciplinarian who serves up punishment with glee. This Catholic School's foundation is solid evil and the walls are covered with blood. When all hell breaks loose, you can be sure that here no one is what they seem! 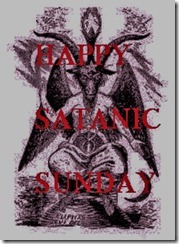 So check out these truly Satanic shock flicks and remember that when celebrating evil there is something for everyone! As always Happy Satanic Sundays!
Posted by A Southern Horror Fan