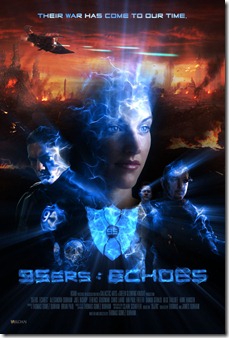 After signing a distribution deal “95ers: Echoes” is completed the production process and ready to set your minds a trippin’. The smart thought provoking sci-fi film is directed by Tom Durham and stars Christopher Miller and Lexy Giovagnoli. Check out the latest trailer below.

War rages in the distant future. Millions have died and cities lay in ruins. But the most feared weapons are the time machines. Final victory can only be achieved by manipulating the past...

In the year 2012, FBI agent Sally Biggs is obsessed with investigating unsolved cases involving paranormal activities—especially the bizarre disappearance of her scientist husband. She suspects that the mysteries have something to do with the destabilization of time, since she herself has a strange relationship with time. She has the power to rewind it—to go back a few seconds, whenever she wants, and remake her choices.

But she had no idea that her power was connected to the cataclysmic war in the future, and that she, her husband, and their unborn child would become its most important targets. Assassins with terrifying technologies are hunting her, and her own timeline is unravelling. Her only hope is to follow her husband's ghost to the awesome truth that ties all the mysteries together—before the ones she loves fade out of reality.