Check Out Trailer No. 3 For Action Thriller “Heavy Duty” 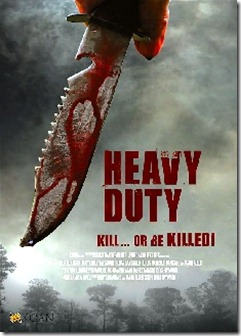 Directed by Rhys Hayward and starring Sebastian Street and Giles Alderson. Check out the trailer for this action packed kill or be killed film.
Forced to retire from military service following a tragedy, Paul Lacey is left to come to terms with the deaths of his men. Numbed by PTSD medication, he has become disconnected, his life now a series of mundane routines. His concerned wife, Sarah, persuades him to accompany her on a camping holiday, hoping the break will help mend their strained relationship.

The couple arrive at secluded location, miles from civilization. Their peace is soon shattered, however, when they witness a brutal murder by a savage gang of Eastern-Europeans. They are spotted fleeing and, as darkness falls, seek refuge in the depths of a large forest. As the gang closes in on the couple, Paul's military instincts quickly surface, and he leaves Sarah behind to embark on a chilling journey of redemption.