My Review Of 1978’s “Invasion Of The Body Snatchers” 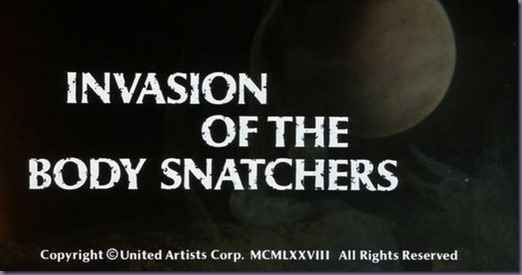 The film is very simple to enjoy. There are no major plot twists that can over complicate some stories. This film stays true to its origins. However in the 1956 film the invasion began in a small town and in this film it moves to the big city of San Francisco. This film also plays on the psychology craze that seemed to sweep the nation between the mid 60’s and early 80’s. Apparently for a while shrinks were the in crowd. I try dealing with them but they just keep wanting to lock me up. It is a conspiracy. Anyway this film is easy to watch and good if your wanting just a hint of horror and mostly looking to feed on nostalgia.

The action was pretty weak and the sci-fi was almost non existent at times. The few times that special effects did play out full on in this film was worth it. The scene of the pods giving birth to the doubles is both organic and entertaining. Mostly this picture relies on the cast to act out with emotion and later without emotion to convey the thrills across to the audience. I don’t think that it came off quite how the director intended. At times Donald Sutherland looks more like a psycho perv than an emotionally concerned citizen. He definitely didn’t know the term “personal space” because he all but crotch rocks Brook Adams in almost every scene they share. Which is a lot because hey!- I noticed!.


Leonard Nemoy’s character is spot on as a psychiatrist and Jeff Goldblum is almost watchable. This version is almost like watchig the more recent adaptation with Nicole Kidman except you don’t have to endure Nicole. She ruined “Invasion” for me! One of my favorite stories of all time. All in all this film is watchable and I enjoyed it for what it was- cheeky fun and nostalgic nuance. However the best Body Snatcher movie for me is 1993 version on the military base with Gabrielle Anwar.
Posted by A Southern Horror Fan