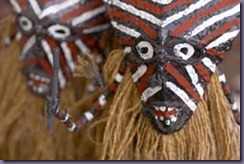 A kind of psychic vampire, the tokoloshe (or tikoloshe) is a creature of the Xhosa people of Lisotho and the southernmost African plains. Like many supernatural beings in Africa, the tokoloshe is a mixture of vampire and demon, and has a strong association with witches and sorcerers.
In many Xhosa legends the tokoloshe is a demon that looks like a baboon and has a connection to water. It’s described as short, bulky, and has a high forehead and balding head, it walks around during night or day swinging its long arms like a monkey. But, it has many powers and can shapeshift if it chooses to. It can take human form, which will make is look almost normal since some of its monkey-like traits will still show. It may also take the form of a big black bird-like creature with a skull head so that it can fly over villages in search of victims.
Like other creatures, the tokoloshe can be used by magicians against their enemies. Such partnerships are usually the result of a pact made between the witch and creature. In return for helping the witch, the tokoloshe may ask for her cow’s milk, food, lodging or sex with the witch as payment. If the witch is male, the creature will ask for the same items, but instead it will want the man to find a woman for it to sleep with.  Sometimes when doing the magicians evil deeds it will take on the form of the skull-headed bird (hili) instead, spreading disease wherever it goes. It’s said that the touch of the creature’s claw can create a lingering sickness that even the most powerful magician can’t dispel.
In some versions of the legend it is said that one can catch a tokoloshe by luring it with blood and milk. Once it is close the local witch-doctor or herbalist can then trap it and destroy its powers.
“Blood Tokoloshe: Dawn of the Beast” begins filming in January. 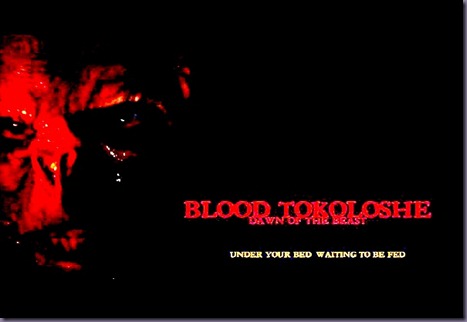 Synopsis
Strange attacks plague the township’s women, leaving the leaders at a loss to defend them. At the same time Mthnuzi, a shrewd businessman, is becoming wealthier and more popular with the ladies – something is amiss. The local reverend, Simon Nkosi, learns that Mthunzi is controlling a Tokoloshe to fulfill his greedy desires. In his greed he breaks a golden rule of maintaining control over the beast, and it goes on a rampage. Now its thirst for blood is strong and comes after Mthunzi’s women, saving the one he loves for last. Together with Reverend Simon they must take on a mythical beast that has never been defeated. 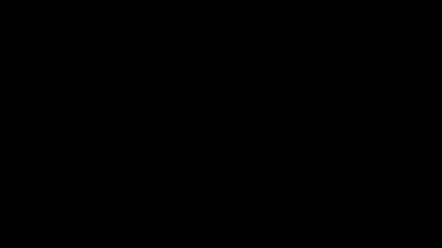