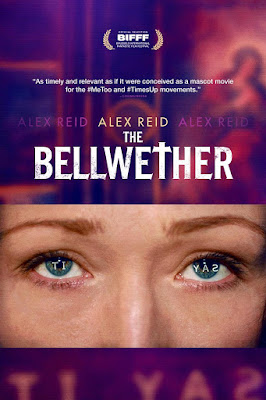 In the film, “to the outside world Joanne (Reid) is just a bookstore owner, but The Conspiracy knows different. She is dangerous. She is a bellwether: a quiet leader who is well on her way to being her whole self. When they kidnap her to break her, to make her conform, they discover that Joanne is something so much more than even she ever knew. The Conspiracy locks Joanne in a 13th-century chapel and she communicates with her ‘operator‘ only through text and images shown on television. In order to break her, they work on her hidden pain, the fact that she had an abortion four years ago. After standing up to the mental torture, the Conspiracy goes even farther; impregnating her and trying to force her to have the baby. At the moment when she is about to give in, she will either break, or everything will change, for herself and for the Conspiracy.”

Genre and BBC favorite Alex Reid is portraying Joanne. A star of the modern horror classic ‘The Descent’ as well as TV’s ‘The Misfits’ Ms. Reid brings a grounded reality to all of her roles. We are honored to have her as the first actress in English to play the lead in a solo female led film and she creates a tour-de-force performance as Joanne Steiger,” said Morrison.

Producer Juri Koll has announced The Bellwether‘s arrival on February 12th on Digital HD, ahead of the film’s theatrical debut in Los Angeles theaters on February 15th with an L.A. exclusive run at Arena Cinelounge Sunset.