My Review Of "The Pinch" 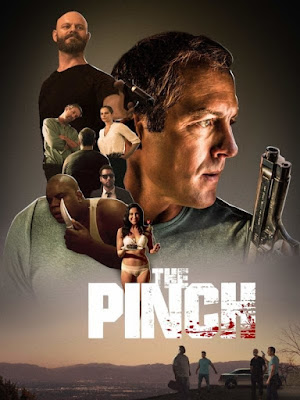 "The Pinch" is a crime thriller directed by Ashley Scott Meyers. It stars Gunner Wright, James Aston Lake, and Candice Bolek. The film is a blend of urban gangland lore and classic noir with a touch of Tarantino's influence.

When a low level mobster is nearly rubbed out by the boss, he decides to take the bonus he was promised by force, so he kidnaps the boss and demands a hefty ransom.

"The Pinch" is a relatively straightforward crime thriller, last-man-out story. Filmed in true indie style the premise transitions from a Tarantino-esque mob mentality into a sort of pulp styled "Lucky Number Slevin". The characters are lacking full development to really set life to Meyers vision,  but there is enough there to connect with them on a basic level. I found the protagonist loveable but tragic but I never fully understood why he was this way.

The cast all give pretty decent performances, a few felt slightly contrived but overall the acting really brought the story to life. I didn't, however,  feelike that the tongue-in-cheek satire written in as comic relief, was necessary. It stepped a bit to far in spoof territory, pulling from the darker overture of the actual plot. It didn't quite hit the pulp film mark. But those moments aside the movie is very watchable, and easily likeable. If crime noir is a favorite genre,  give "The Pinch" a go. (3/5)
Posted by A Southern Horror Fan