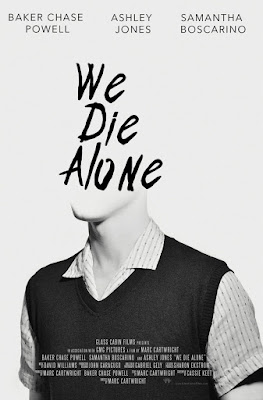 A teaser trailer has been released for Hitchcockian thriller "We Die Alone". The film is written and directed by Marc Cartwright. and stars Ashley Jones, Baker Chase Powell and Samantha Boscarino. This one is getting ready for a run on the festival circuit.

Aidan (Baker Chase Powell), is a young man crippled by loneliness and insecurity. He wants nothing more than to experience love, but he compulsively ghosts any connections he makes through dating sites. His co-worker Elaine (Emmy nominated Ashley Jones), generous with her advice and kindness to a fault, encourages Aidan to put himself out there– although, in her heart of hearts, she wishes he would pick up on her feelings for him.

Everything changes when the beautiful but distant, Chelsea (Samantha Boscarino), moves into an apartment across the hall from Aidan’s. The two feel an instant connection based on their refusal to engage in social norms, and bond over an unusual hobby. This chance encounter throws Aidan into a spiral of dangerous infatuation that will alter all three of their lives forever.

Touching on themes of loneliness, obsession, and the brutal nature of relationships, We Die Alone assesses the aftermath of what happens when three isolated people with different ideas about love become dangerously entwined.