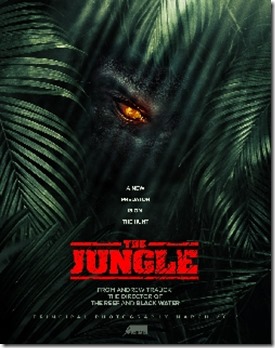 The survival thriller that pits man against beast from Lightning Entertainment Group has been completed. “The Jungle” is directed by Andrew Traucki and stars Rupert Reid, Agoes Widjaya Soedjarwo, Michelle Santos, Igusti Budianthika. Check out the trailer below. It was released last Nov. for the kickoff of the crowd funding campaign that ran on Indiegogo. This is the third film in Traucki's genre trilogy of terror, along with “Black Water” and “The Reef”, which he is calling ‘Three Colours Red’.

An exploration deep into the dense rainforests of Indonesia to film and tag the elusive, endangered  Javan Leopard leads to a journey of terror. On their search for a reported alpha-male leopard, spotted wandering outside of its normal territory, reportedly terrorizing local settlements, a team of conservationists discover a new species, a horrifying “apex predator” that has no fear of humans!