B Movie Throwback “Don’t Let The Riverbeast Get You!” 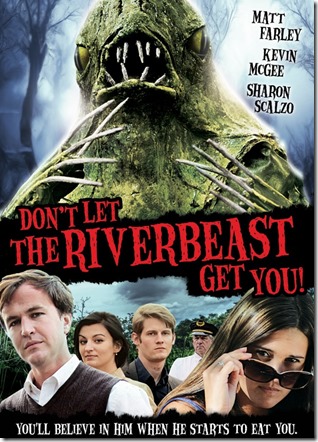 I do love old b-movies and classic creature features. I am glad that the last several years has seen un upswing in the love the genre has been receives. Check out the trailer for throwback creature feature “Don’t Let The Riverbeast Get You!” The flick is directed by Charles Roxburgh and set to release on DVD May 21st. It stars Matt Farley, Sharon Scalzo, Kevin McGee, Elizabeth Peterson, Tiffany L’Heureux, Bryan Fortin, Chris Peterson, Millhouse G, Jim Farley, Jim McHugh, and Tom Scalzo.

A vicious monster has arisen from its watery lair! It’s the Riverbeast, and he’s threatening a peaceful New England town. Local tutor Neil Stuart has seen the beast before, but nobody believed his story, making him the town laughingstock. Neil sets out to not only prove that the Riverbeast exists, but also, with the help of his beautiful pupil, scrappy tutor buddies, and a former professional athlete to vanquish the aquatic menace!