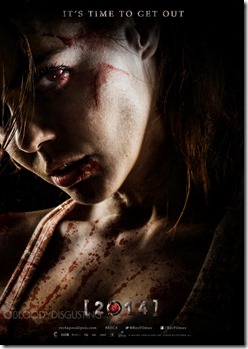 Check out the teaser trailer and poster released for “Rec 4”. The final installment to the fan favorite zombie franchise. It spawned an English retelling titled “Quarantine”. “Rec 4” was directed by Jaume Balagueró and stars Manuela Velasco, who returns to play the role of Angela Vidal.

Angela Vidal, the young television reporter who entered the building with the fireman, manages to make it out alive. But what the soldiers don't know is that she carries the seed of the strange infection. She is to be taken to a provisional quarantine facility, a high-security installation where she will have to stay in isolation for several days. An old oil tanker, miles off shore and surrounded by water on all sides, has been especially equipped for the quarantine.