Trailer No. 2 Released For "The Quantum Terror" 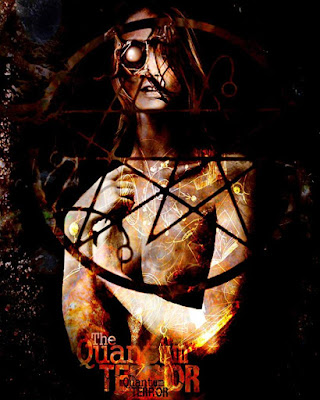 The second trailer has been released for metaphysical horror "The Quantum Terror". The film is heavy on Lovecraft and written and directed by Christopher Cooksey. It stars Kristin Cochell, Paula Marcenaro Solinger, and Matt Blackwell.

Inspired by the works of Lewis Carroll, H.P. Lovecraft, and David Lynch, in conjunction with a love of horror movies like Alien, The Thing, and Into The Mouth Of Madness, director Christopher Cooksey shot The Quantum Terror in Austin, TX for a mere $15,000 and is now wrapping up production after almost four years. Funded through Indiegogo, a private investor, and selling his car, the entire movie was filmed in and around his home. A small skeleton crew of artists, such as Heather Lowe and FaceOff‘s Jenna Green, created faux sets, miniatures, and creatures all built from mostly household materials and methods learned from friends in the industry like the folks at studioADI and The Stan Winston School of Character Arts. The production was also lucky enough to have additional practical tentacle effects provided by the Oscar-winning FX company Amalgamated Dynamics Inc. (Tremors, Alien3, Starship Troopers) and visual effects help from Make-Up Effects Group (The Matrix, Childhood’s End, The Wolverine).