My Review Of "The Demonologist" 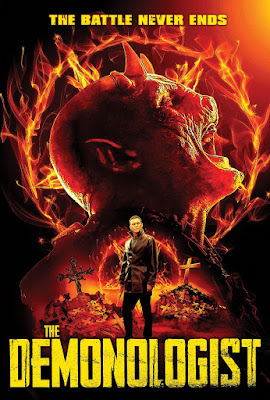 "The Demonologist" is a supernatural thriller directed by J.M Stelly and stars Brian Krause, Lara Grice and Thomas Francis Murphy. The film is an amalgamation of several genres with classic crime thriller mixing it with a demonic agenda. Much like the 'Exorcist' series revealed in its short-lived run.

A detective is haunted by nightmares of his past and visions he cannot understand. When he investigates a string of brutal murders, he discovers a Cult that worships the four King Demons of Hell, who plan on bringing them forth to destroy the Earth. He must stop the Cult from starting the Apocalypse and finally come to grips with his birthright and destiny as The Demonologist.

Stelly's story is a well crafted "fate of the world" concept, rich with nior overtures and supernatural whimsy. Part cop drama, part graphic novel, all framed in an antihero origin story. It isn't a bad movie, the movie buildstarts up a nice story arch. The problem I had with the film is the lack of substance and depth. Scenes were chewed apart with pointless, predictable banter instead of material that would fully realize the charactet's situations.

The acting was mixed, some scenes were on point, even though the characters felt more two-dimensional. At times dialog was delivered over-the-top, or came off cheesy. The consistency was slightly off. I did like the overall concept that Stelly was shooting for with "The Demonologist" , I just think it would have came out stronger as an 8 to 10 short episode webseries.

The special effects are the typical supernatural CGI stuff. The practical work was real nice. Overall it reminded me of some of the stuff they did on 'Charmed' and 'The Librarians'. This isn't going to be a movie that most demon cult, supernatural horror fans are gonna get into, but it has its audience. Check it out but go in lightly and have fun. (2.5/5)