My Review Of "Doom Room" 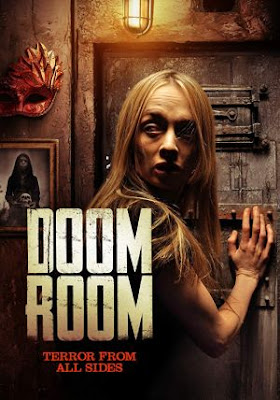 A woman wakes up locked in a small room with no memory of how she arrived there. Unable to escape, and tormented by a series of paranormal entities, she must uncover the riddle of who she is and how she got here.

Inspired in part by a true story, a young lady was held captive in a slave chest under a sadistic couple's bed for seven years, "Doom Room" is a highly imaginative dark fairytale told stylistically as a sequence of nightmares and dreamscapes. Sometimes confusing,  and incoherent the scenes play out like broken episodes of a disturbed thought. Othertimes the screen feels more like whimsical musings from some Hell cast.

The cast give good character. Expressive,  impactful creatures often melodramatic and 100%  theatrical. There are moments that the acting breaks scene cohesion,  slipping slightly,  but for the most part everyone was cream. I kept finding my mind flickering inspirations of Alice, not as she was in Wonderland, but as she truly was in the sanitarium. The film I compare it most to is "Red Kingdom Rising" from Navin Dev.

It is at it's core about a girl locked in a box and dealing with a fight or flight psychological crossroads thing. Similar films have come out and it is a tricky style of storytelling to get right, but "Doom Room" has more good going for it than bad. Definitely check it out. (3.5/5)