Interview: Mark Netter Has A Code For The Nighmare Game 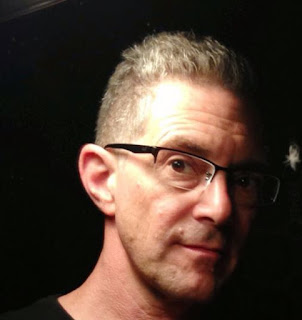 Mark Netter's directorial debut is an ambitious and well-done nightmare that succeeds in creating an entertaining, and emotionally involved found footage story. "Nightmare_Code" is Netter's starting point in developing his on modern horror stories, but I doubt it will be his last. I kind of feel this is what he should have been up to prior to "Nightmare_Code" because it was such a creative concept that developed into a really thrilling story that traveled into realms of horror between man, machine and madness.

You can read my review of "Nightmare_Code" and if you haven't already I suggest you give this found footage a chance. There is a nice affectation to the story's style that hints at a H.P. Lovecraft, but with a very noticeable Clive Barker flare that adds some depth to the concept of evil possessing man's inventions. Meanwhile check out this interview with the witty and impressive director of "Nightmare_Code".

A SOUTHERN LIFE: How did this come together, Mark?
MARK NETTER: It’s been a long and wild ride, starting with a lunch in January 2012 where Executive Producer Craig Allen and I came up with the idea of making a surveillance footage movie about sentient computer code, where I’d direct and his videogame company, Spark Unlimited, would put up the funding.


I ran home and called a friend of mine across the country in NYC, M.J. Rotondi, convincing him to co-write the script with me. We delivered it 40 days after the lunch, got notes from Craig and writer friends, did a second draft and started casting.

In June and July 2012 we shot NIGHTMARE CODE over 7 weekends. It was like a secret club the actors and crew would return to every week. We finished editing in March 2013 and then had to raise more money, then creating the 600+ visual effects in the movie from November 2013 through August 2014.

Last October we premiered at The 14th Annual Shriekfest Horror & Science Fiction Film Festival in Los Angeles, chosen for inclusion by the wonderful Denise Gossett, festival creator and actor. She championed our movie and the festival judges awarded NIGHTMARE CODE “Best Thriller Feature Film.” Then this past January we won the top prize at The 2015 Philip K. Dick Science Fiction Film Festival in NYC, and were picked up for distribution by Indie Rights.

As of this month you can buy or rent NIGHTMARE CODE on iTunes, Google Play, Vimeo, Vudu, Steam, Xbox, VHX and YouTube Movies. We’re coming out on DVD November 24th, which will include the freewheeling and informative commentary track with myself and our leading man & woman, Andrew J. West (THE WALKING DEAD) and Mei Melançon (X-MEN: THE LAST STAND). We are doing influencer screenings as well.

The secret to it all coming together is the strength of the initial concept and the tremendous collaborations across the board to constantly improve on that vision in bringing it to life, without ever losing the core ideas that excited us so much.

A SOUTHERN LIFE: Was the story at all influenced by your experiences in video game design? Come across any ROPER-like software?
MARK NETTER: From producing videogames I learned how programmers talk and behave, what their typical work tasks are like, and what kind of pressures they often face. The way I learned how to use spreadsheets for complex asset requirements was perfect training for creating the 600+ line Google Sheet that described and categorized all of the VFX for Psychic Bunny, our post house.

And I’ve been in a tech start-up similar to the one creating ROPER, the behavior recognition software and out-of-control artificial intelligence at the heart of NIGHTMARE CODE – I know what it’s like to be in a troubled start-up!

When we wrote and shot the movie, there were no behavior recognition companies that the public knew about yet, but now there’s a number of them doing ROPER-like facial tracking and behavior recognition, where they purport to tell what a person is thinking and feeling. Our idea is what happens when a program like that takes on a life of its own, and that day could be not far off as well.

A SOUTHERN LIFE: Is this you trying to warn us against what’s ahead… or already here?
MARK NETTER: We built NIGHTMARE CODE to start a conversation about technology and whether it’s not only outstripped human control, it’s turned around and started controlling us. And we appear happy to give up huge amounts of human choice to our machines.

A SOUTHERN LIFE: How did you initially describe to the film to your cast?
MARK NETTER: We thought we had written a surveillance footage horror film, so that plus the technology angle was what got the actors reading the script. Once they did, for example with Mei and Andy, I met with each of them individually to feel each other out and share ideas about their character. Like many of the actors, they had perceptive takes on their characters that taught me more about what Roto and I had written and helped us hone the moments.

A SOUTHERN LIFE: The movie has been getting a lot of press over the last couple of months, has that helped in terms of distribution and sales?
MARK NETTER: We already have North American digital and DVD distribution, but we love having the quotes to put on our poster and help us sell internationally and to license (hopefully) to cable TV.

As a 100% independent feature film without a big studio advertising budget, both the reviews and interviews are how we reach viewers who love suspenseful, shocking and thought-provoking films and might want to see ours, so we thank you so much for this opportunity to get our story out!

A SOUTHERN LIFE: Do you take notice of reviews- or do you consider the audience’s opinion more valid?
MARK NETTER: The reviews have been very gratifying, letting us know that all the thought and effort we put into the NIGHTMARE CODE is working for the majority of our audience, and we get the same response at our screenings and in social media. With regular audiences you’re just getting the raw response, and I respect that as an avid audience for feature films as well.

But I do love reading a well-written, thoughtful critic’s review, even when they may question or disagree about some aspect of the movie, as long as it feels like we sparked some movie-imagination excitement of the type that inspired us to start back in January 2012. If a film-knowledgeable reviewer is engaged enough to write a thoughtful review of NIGHTMARE CODE, it can be very illuminating and exciting for us.