Horror Short "Night of the Slasher" Competes For OSCAR 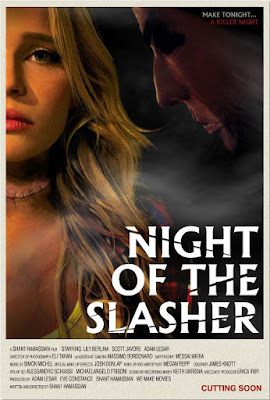 Multi award-winning short film, Night of the Slasher, written and directed by Shant Hamassian, competes for Best Narrative Short at two Oscar® qualifying festivals; the St. Louis International Film Festival in Missouri, USA and the Foyle Film Festival in Ireland. If it wins, it becomes eligible for an Oscar® nomination.

Henry Selick (Director of Nightmare Before Christmas and Coraline) saw the film at the Telluride Horror Show and said, “I really loved ‘Night of the Slasher’! It's smart, clever, and funny!”

Night of the Slasher is a 'shot-in-one-take' film about a teenage girl who must commit horror movie sins by drinking alcohol, doing drugs, and having sex in order to lure a masked killer and exact revenge.

“I wanted to write a slasher film where on the surface, it is a self-referential genre film, however there is a deeper meaning behind everything we see and how we are all connected to this genre as a culture. I chose to write this film on a deep and personal level because I personally had to deal with a traumatic moment in my life. Making this film was an exploration on how to cope with those painful memories and to tell a story on how to not let the past control our lives. In the end, a great slasher film reflects the killer as a state of mind.”, explains director Shant Hamassian.

After its successful world premiere at the Bucheon International Fantastic Film Festival in South Korea, this highly stylized short has been programmed at 91 film festivals including the prestigious Screamfest (Los Angeles) and Frightfest (London). The short has been nominated for 28 awards and has won 15 including Best Short,  Best Actress, and Best Cinematography.

America’s reference site for horror movies, Dread Central said that Night of the Slasher “is surprisingly both funny and suspenseful in one small package.”

Shant Hamassian (@ShantHamassian) grew up in the rolling hills of Calabasas, California and attended Art Center College of Design in Pasadena. He has directed several music videos, comedic sketches as well various shorts that have won awards and played internationally in the film festival circuit. Shant is currently working with NBA Champion and former Laker, Rick Fox on a web series titled, Herman the Monkey. Night of the Slasher is a “proof-of-concept” based on one of many feature screenplays he has written, including Neville which made the 2011 Bloodlist.

To find out more about Night of the Slasher, full list of awards, and its tour calendar, please check the official website www.nightoftheslasher.com

Night of the Slasher - Official Trailer from Shant Hamassian on Vimeo.
Posted by A Southern Horror Fan