My Review Of "Ouija" 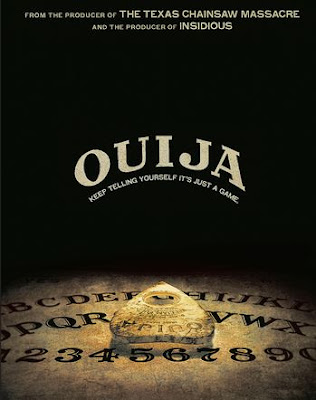 Occult horror "Ouija" is a paranormal thriller directed by Stiles White and starring Olivia Cooke, Douglas Smith, Bianca Santos, Ana Coto, Daren Kagasoff, and Douglas Smith. The story is a haunting and atmospheric tale that focuses on a malevolent force using a spirit board to reach out to the living with deadly consequence.

Synopsis: A girl is mysteriously killed after recording herself playing with an ancient Ouija Board, which leads to a close group of friends to investigate this board. They later find out that some things aren't meant to be played with, especially the 'other side'.

"Ouija" has a pretty cool and creepy story to work with, an old spirit board discovered in the attack, suicides and haunting, a creepy legend that connects the board to the house of the suicide girl, it is all perfect horror subject matter. Unfortunately there is something missing from "Ouija" that makes it more spectacle than horror. The scenes build nicely through suspense, shadowy, eerie atmosphere, and great sound effects, but the end result falls flat. The big scares aren't really scary.

The cast give well enough performances of these haunted characters. The direction and cinematography are equally stellar. You can tell money was well spend in production, "Ouija" has all the right components to be a real good horror film, unfortunately it all stays pretty PG. The horror seems almost pulled back into safer zones when they should have took that thrilling momentum and gone for some major scares. Not sure why they chose to keep things subdued. I mean really for what "Ouija" is it is a nice, creepy Halloween horror film based on an occult staple-the spirit board. And there are a few scare-ish moments that use the sudden shock gimmick to get a jump out of the movie-goer but still this film is far less exciting than say "Insidious" or "The Conjuring".
Posted by A Southern Horror Fan