Check out the new poster for indie horror “Fat Chance”. The film is a campy throwback to the over-the-top, gross-out slashers of the '80's described as “The Biggest Loser” meets “Friday The 13th”. “Fat Chance” is directed by Daniel Emery Taylor, Jim O'Rear and is currently in post-production. It stars Daniel Emery Taylor, Jim O'Rear, G. Larry Butler, James Hampton, Scott Tepperman, and John Dugan. Emery and Taylor were the twisted minds behind the horror film “The Hospital”.

Ten obese men appear on a competitive reality show geared toward weight-loss. As the competition grows more intense the contestants realize they are losing more than just weight; they are losing competitors. Are the contestants dropping out voluntarily or is something more insidious going on? Will they survive? Fat chance. “Fat Chance will make have a premiere at the Movie Days celebration in Dortmund, Germany (March 21-23). U.S. screening are planned for sometime following the premiere. Stay tuned here or with the film on their Facebook Page to find out more. 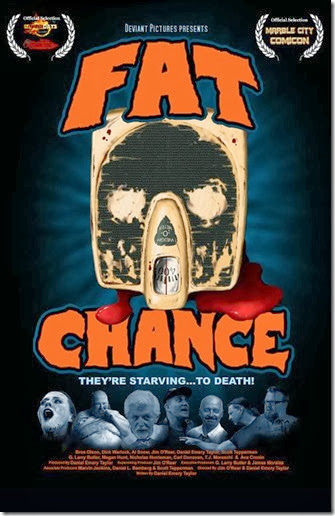