Teaser Trailer Released For “I Am Alone” 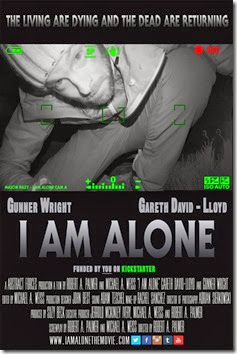 Check out the teaser trailer for indie thriller “I Am Alone”. The film comes from Abstract Forces and is the studios first feature film. “I Am Alone” is directed by Robert A. Palmer who co-wrote the screenplay with Michael A. Weiss. The film stars Gareth David-Lloyd, Gunner Wright, Rory Zacher, and John Best.

Jacob Fitts television host and survivalist, with his crew Producer Adam Levine & Cameraman Mason Riley set out to shoot another episode of their popular survival show, I Am Alone. Episode 113 takes us deep into the Colorado Rockies where Jacob will be left alone for 7 days while his team sets off into town to capture footage and shoot interviews. Within hours a viral outbreak spreads rapidly across the globe. Unaware of this outbreak, Jacob, isolated continues shooting his Television show. As day one comes to a close Jacob is attacked and bitten by an infected person.

As the virus spreads through the town Mason and Adam have to fight the infected to save their own lives. With the CDC monitoring the outbreak they pick up Mason and all his footage and bring him back to base for questioning. Reviewing Mason's footage the CDC tries to piece together why the virus has taken longer to transform Jacob. The CDC forces Mason to relive the events of the previous days through his footage to learn more about the virus and Jacobs survival.

As the global death rate rises time is running out, to find a cure.