Thanks to Horror Society for this bit of awesome indie news: 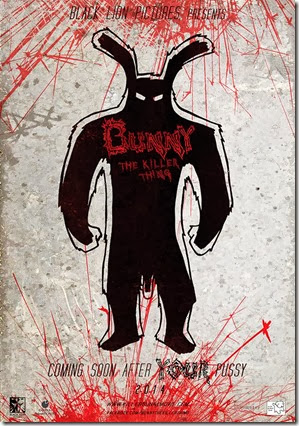 “Bunny The Killer Thing” a group of Finnish and British holiday makers who become stuck in a cabin, in the dark winter woods of Finland where they are terrorized by a creature which is half human, half rabbit. The creature is Bunny the Killer Thing, who is after anything that resembles the female genitals.

A group of seven Finnish young adults are heading to have a fun weekend at a cabin in the dark woods of Finland. By chance, three foreign men end up to the same cabin. The men seem to be hiding a secret. The party weekend at cabin becomes a game for life and death, when suddenly a weird creature attacks from forest to terrorize the people! The creature is a half man, half rabbit, and it is after anything that resembles the female genitals. The creature is Bunny the Killer Thing!

Bunny the Killer Thing already has the Finnish cinema and DVD distribution, but our main goal is to have an international distribution. All the cents count when we are making this to happen! Look at the perks and see what we can offer for you, for your great help.

We will need 9900 USD to make this film happen. And this money is used for the filming. We are making this film as a voluntary work, so any of the cast or the crew won’t get any payment for making the film. All the money is used for the expenses of traveling, props, accommodation, catering, special effects, equipments’ rents, etc.We have great perks for you! There is actually a hilarious Bunny product family, and most of them are products which are quite hard to find outside Finland in other ways than from this IndieGoGo campaign! We offer you the chance to see the film before anyone else.

If we don’t reach our entire goal, all the money are still used for the filming. BUT, then there will be less blood and tits, and a great fear to have starving cast & crew. In all cases, you will be a GREAT help to make Bunny happen! Because, after all, it is after YOUR p*ssy, not ours.
Bunny the Killer Thing has been already promoted in Cannes 2013, where it got a good interest. Bunny is very old school horror-comedy made with spirit of splatter and camp films. This is an honest entertainment, yet a very unique crazy horror-comedy. You will love Bunny, or you will hate Bunny. But we won’t DISAPPOINT the people who love Bunny and old school horror-comedies.