My Review Of Bedlam Stories 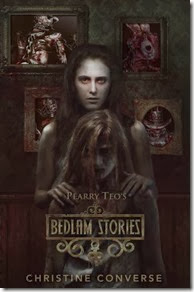 Before Bedlam Stories brings it’s twisted mash-up of Fairtyale Horror to the big screen check out the whole dark nightmare in Bedlam Stories novel form. The story is the dreamscape of Pearry Teo and written by Christine Converse. The story is a enveloping mash-up horror show that brings together two iconic fantasy lands, Wonderland and Oz. Teo has taken everything we know of the two beloved characters of Alice and Dorothy and twisted their worlds into very dark, nightmarish visions.  Bedlam Stories is set in inside a decaying asylum where the staff have sinister motives that are meant to corrupt and pervert both Alice’s and Dorothy’s unique gifts and connection to their mystical wonderlands.

Without giving too  much of the story away, Bedlam Stories creates a world that challenges the classic concept of Alice. She is a dark, disturbed child of horror with no remorse or compassion. Her fairytale companions are nothing more than demonic messengers of revenge that will be pitted against the companions of Dorothy. The story is told through the point of view of a new character that Teo has introduced into this dichotomy of worlds that clash within the rusted and ruined walls of Bedlam asylum. The tale is complex, filled with chilling descriptions of macabre situations.

Bedlam stories is only the first chapter in this insane horror tale so most of the book is a story builder to more terrifying, intense drama to come. The visual descriptions of the characters situational climaxes for the most part are meant to set up the coming vision of the film that Teo plans for Bedlam Stories. Christine Converse’s writing brings to life the visions of Bedlam Stories in disturbing realistic intensity. They are deliciously dark tastes of the demented world that sees an evil Alice by forced design rail against all that she comes in contact with, facing a formidable foe in a epic clash of will and unrestrained emotional determination that will pit personal demons against personal demons. It is all very deep and thrilling, with enough complexity to keep you on edge as Bedlam Stories phantasmagoric tale unfolds.

For the most part Bedlam Stories is a creative, unique dark vision that offers a new reality for Alice and Dorothy that goes far beyond what the two characters ever endured in their respective adventures that we all grew up on. It is as if American Horror Story and Once Upon A Time melded into the abyss then spat back a malformed mutant creation that  writhes in the suffrage of nightmares. Some moments in the novel seem a bit expected and anticipated but for most of the story everything unfolds in spectacularly suspenseful originality. Bedlam Stories is a nice, dark read that fans of horror and both Wonderland and Oz should enjoy. A definite good read.
Posted by A Southern Horror Fan