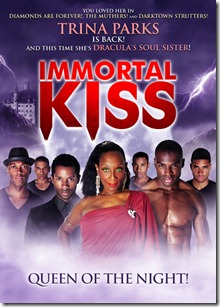 The Queen of the Vampires will rise this fall as 007 Bond Girl, Trina Parks of Diamonds Are Forever, returns to the screen in Immortal Kiss: Queen of the Night. Co-starring Preston Davis of TV’s Entourage, the supernatural thriller will bite into retail outlets and VOD November 6, 2012.

The eccentric Amina (Parks) and her secretive assistant Parnell (Davis) have invited five handsome young men to her secluded mansion with the promise of work. Little do the men know their mistress of the night is actually a vampire seeking a new single consort – and only one will survive to be her chosen prince of darkness.

It has been thirty years since Parks’ last feature film, The Blues Brothers, but it was her turn as “Thumper” in Diamonds Are Forever that made her famous, becoming the first African-American Bond Girl of the 007 franchise. Immortal Kiss director David DeCoteau sought out the professional singer and dancer to lead the all African-American cast. “I’ve been a fan of Trina’s for such a long time,” he says. “She was just stunning in so many of her early roles and she’s remained a beautiful and talented woman. To have her lead our cast has been a wonderful experience. She poured so much energy into her role as Amina, she really makes the film.”

Parks herself says her 007 days continue to affect her life on a regular basis. “I did a musical at the NY State Theater [because] the director was a big James Bond fan,” says the sultry actress. “I also started to tour Europe and the Far East (Japan) as a featured soloist and guest artist. I [was also] the first African-American to open the ‘Chrystle Room’ at the [then] new Otoni Hotel.”
It was upon joining forces with a new agent earlier this year that Parks and DeCoteau were able to connect. “Immortal Kiss was absolutely different than any other film I’ve done. I always seem to get ‘bad girl’ roles,” Parks chuckles. “It went very smoothly. I do hope to shoot another film with him.”

Nor does the vegan, body conscious and a dancer since the age of eight, have any issues appearing in her first horror film, saying, “I absolutely loved playing a vampire, and hope I’ll get to do it again. She was so classy, rich and eccentric. 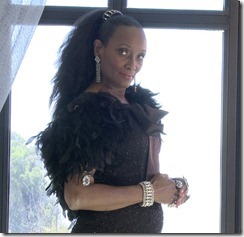