For The Love Of Voodoo: 10 Films That Celebrate The Darkest Of Black Magicks 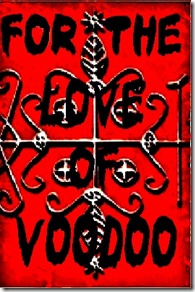 In the last two days I have watched some films that focus on one of the most superstitious and mysterious practices. Voodoo. The darkest of the dark arts. From the creation of zombies to the manipulation of others through little dolls and even darker practices voodoo is the black sheep of magic. It is actually the outcast bad boy of mysticism that is treated more like a dirty little secret. Well except in the horror genre. Here it is celebrated and I am listing 10 cool films that celebrate everything voodoo. From classic cinema to today’s standards. These films exist for the love of voodoo. 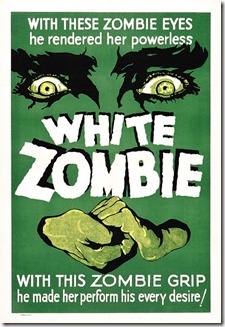 Young couple Madeleine and Neil are coaxed by acquaintance Monsieur Beaumont to get married on his Haitian plantation. Beaumont's motives are purely selfish as he makes every attempt to convince the beautiful young girl to run away with him. For help Beaumont turns to the devious Legendre, a man who runs his mill by mind controlling people he has turned into zombies. After Beaumont uses Legendre's zombie potion on Madeleine, he is dissatisfied with her emotionless being and wants her to be changed back. Legendre has no intention of doing this and he drugs Beaumont as well to add to his zombie collection. Meanwhile, grieving 'widower' Neil is convinced by a local priest that Madeleine may still be alive and he seeks her out. 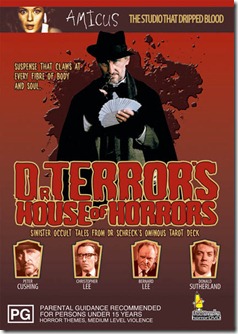 Five strangers board a train and are joined by a mysterious fortune teller who offers to read their Tarot cards. Five separate stories unfold: An architect returns to his ancestral home to find a werewolf out for revenge; a doctor discovers his new wife is a vampire; a huge plant takes over a house; a musician gets involved with voodoo; an art critic is pursued by a disembodied hand. 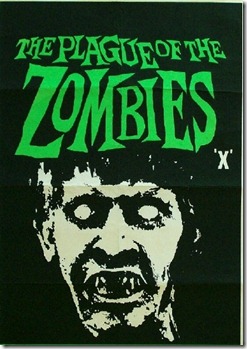 Young workers are dying because of a mysterious epidemic in a little village in Cornwall. Doctor Thompson is helpless and asks professor James Forbes for help. The professor and his daughter Sylvia travel to Thomson. Terrible things happen soon, beyond imagination or reality. Dead people are seen near an old, unused mine. Late people seem to live suddenly. Professor Forbes presumes that black magic is involved and someone has extraordinary power. He doesn't know how close he is: the dead become alive because of a magic voodoo-ritual, and so they must serve their master as mindless zombies... 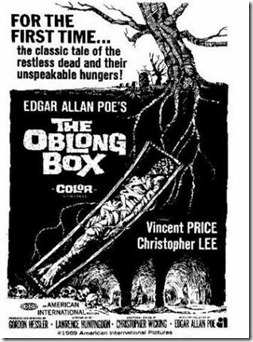 Aristocrat Julian Markham keeps his disfigured brother, Sir Edward, locked in a tower of his house. Occasionally Sir Edward escapes and causes havoc around the town. Based on the classic tale by Edgar Allan Poe. 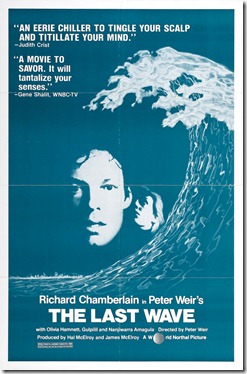 A Sydney lawyer has more to worry about than higher-than-average rainfall when he is called upon to defend five Aboriginals in court. Determined to break their silence and discover the truth behind the hidden society he suspects lives in his city, the Lawyer is drawn further, and more intimately, into a prophesy that threatens a new Armageddon, wherein all the continent shall drown. 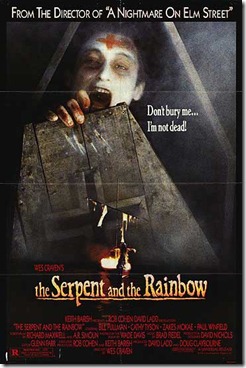 Dennis Allan is a scientist who visits Haiti on the strength of a rumor of a drug which renders the recipient totally paralyzed but conscious. The drug's effects often fool doctors, who declare the victims dead. Could this be the origin of the "zombie" legend? Alan embarks on a surprising and often surreal investigation of the turbulent social chaos that is Haiti during the revolution which ousted hated dictator "Baby Doc" Duvalier. Often a pawn in a greater game, Alan must decide what is science, what is superstition, and what is the unknown in a anarchistic society where police corruption and witch-doctory are commonplace. 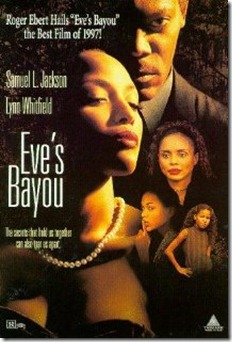 The story is set in 1962 Louisiana. The big Batiste family is headed by charming doctor Louis. Though he is married to beautiful Roz, he has a weakness for attractive women patients. One day Louis is flirting with married and sexy Metty Mereaux, not knowing that he is observed by his youngest idealistic daughter Eve, who is there by accident. Eve can not forget the incident which is traumatic for her naiveté and shares a secret with older sister Cisely. Lies start to roll... 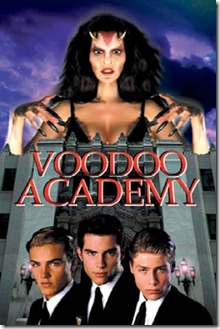 Young Christopher has just enrolled at the prestigious Carmichael Bible College, managed by the somewhat unusual Mrs. Bouvier. After some unexplained disappearances, Christopher does some exploring and discovers that Mrs. Bouvier and the Reverend Carmichael have some very unwholesome intentions for the young men of their school. Will Christopher graduate with his body and soul intact? 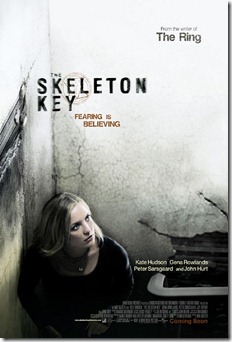 A young woman helping care for an invalid in New Orleans finds herself caught in the middle of morbid going-ons centered around a group of Hoodoo practitioners. It doesn't take her long before she discovers the true need for her presence at the home. It will be a struggle not only for life but for her very body! 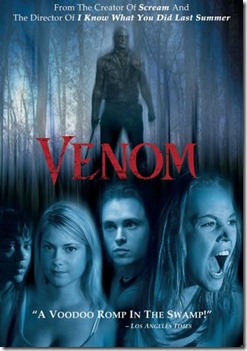 A pack of teenagers run for their lives through the swamps of Louisiana, as they are chased by Mr. Jangles, a man possessed by 13 evil souls who is relentless in his pursuit of new victims.
Posted by A Southern Horror Fan