New Images From “The Hospital” 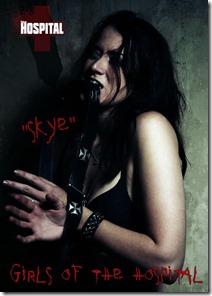 “The Hospital” is a new horror flick that is taunted as being the bloodiest, scariest and sickest film ever! That is what intrigues me most about this project from Jim O’Rear directed by Tommy Golden and Daniel Emery Taylor. The film is stated as this by the Indiegogo page:  “The concept of this film is easy! Just imagine “Texas Chainsaw Massacre” fell in love with “Paranormal Activity” but because of fertility issues couldn’t have a baby so they found a sperm donor “Hostel” and they had a baby. This baby would be named The Hospital!
The Hospital is going to push every boundary within the horror film genre for sure. It’s best quoted in our indiegogo video: “We are going back to the old school horror story telling such as The Original Friday The 13th, Rosemary’s Baby, and I spit on your grave!”

Synopsis: Old St. Leopold's Hospital has many urban legends surrounding it, but the residents of Bridgeport all agree on one thing: tortured souls roam its abandoned halls. The mystery proves too much for a pretty young student who decides to investigate for her senior class project. Unfortunately, she does not find ghosts. She, instead, finds Stanley... serial rapist, murderer, and psychopath. As the young girl becomes Stanley's new pet, a team of young investigators descend on the hospital to "hunt some ghosts." Stanley sees nothing but fun and games in his future. But, what Stanley does not know is that the hospital truly is haunted and the restless spirits there are not happy with what he has been doing. Check out the production stills recently posted from “The Hospital”.