My Review Of “Ancient Alien Question: From UFO’s To Extraterrestrial Visitations” 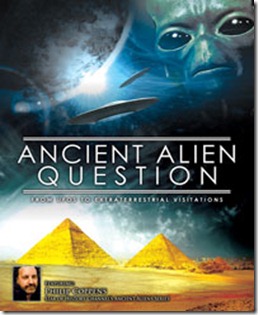 “Ancient Alien Question” is a documentary that sets out to answer the very questions of whether we are alone or have we been visited in our ancient past. The documentary is a next level discussion based on host Philip Coppens novel by the same name. He is also been prominently featured in the History channel series study “Ancient Aliens”. I did not have much hope invested in documentary expecting it to be the same old over debated questions of Alien intervention or contact by the same old investigators power pointed with the same old over exposed cases. I was very surprised to find a new and refreshing study unveiled in this documentary which actually gave me a mental list of fun explorative facts to check out online as soon as the film would end. Not many documentaries do that for me these days. Most give the impression of “seen that, heard that all before”. “Ancient Alien Questions” brings different, little known cases to light with edge of notoriety investigators and approaches a new level of conversation that I frankly had never heard discussed before. Historical events and research that has only vaguely been mentioned then quickly dismissed by other documentaries or shows.
With Philip Coppens  casual and refreshingly unexaggerated personality bringing up very interesting new topics with true honesty I found this documentary enjoyable to watch. There are specific questions that create a list that almost all Alien hunters for the truth hold to which Coppens mentions then systematically sets out to bring to light what makes the case that substantiates the argument for each of these questions and actually says whether or not he himself believes the common answer. More times than not he quickly points out the things that make some more celebrated discoveries as not true while proving the more intriguing and over looked discoveries as possible signs of proof of Alien involvement. This documentary brings forth new researchers that have not been over washed in the media with new lesser known areas of research that deal with cases such as The Chinese Dropa stones and African tribes with alien origin stories. There are also new more vibrant questions brought to light that show mankind’s abilities scientifically in ancient history as being more advanced than mainstream knowledge is willing to recognize. All in all this was a very informative and entertaining documentary from Reality-Entertainment.
Posted by A Southern Horror Fan