My Review Of “Thug Life: All In The Game” 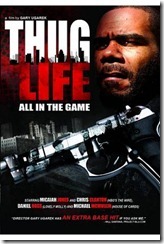 “Thug Life” directed by Gary Ugarek is an hour long hardcore look into  urban street life that is gritty and blunt in it’s approach. Shot in black and white the film has a stark in-your-face unapologetic view of gangs and what urban youth have come to call “The Game”. There is not much about this film or the emotion that it tries to convey that I relate to. To me it all seems senseless and counteractive to a normal life. That being said one cannot deny that this way of life is far more familiar to city and suburban kids than the quite mostly uneventful life that my white ass could imagine. The story follows a “firm” in the mean streets of Baltimore as they make their way up the latter to claim more territory in a bold and brutal scheme.

“Thug Life” begins as a window into this cold and straight forward life on the streets where gang politics dominate the landscape. One that sees children as foot soldiers peddling drugs for older members who in turn answer yet to older gang members in a relentless game of rules and methods. A life that sees more bloodshed than any other life in todays society other than war. There isn’t much of a moral or life lesson to the film and very little heart can be felt in the characters portrayed. It is a cruel and hard look into a world that very few set out to explore and those who live in it’s grip have few chances to escape from. As detached as I felt toward this film it does open my eyes to the flat careless ways of urban violence, ways that have no sympathy or care for life nor true respect for society to say the least no care or appreciation for life itself starting with their own. A true matter of fact hardcore look at the mentality and cruelty of “The Game” or gangbangers is what you have in “Thug Life”. If urban movies that draw light to this lifestyle are your thing then this film may set well in your collection.
Posted by A Southern Horror Fan