Check Out The Trailer For Indie Rich “Porkchop 3D” 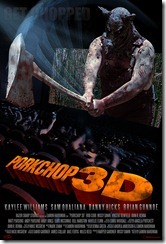 “Porkchop 3D” is an indie flick worthy of cult movie richness. The film is directed by Eamon Hardiman and stars Kaylee Williams, Sam Qualiana, Danny Hicks, Brian Gunnoe, Robert Cobb, Vincent Renfield, John R Renna, Missy Dawn, Andy Jones, Angela Pritchett, and Elvis McComas. It takes horror back to those gory glory days of B-movie flavour found in films such as “Madman” and “Leatherface: TCM III”. The film is shot in 3D and is the third film in the trilogy that focuses on the pig masked slasher. “Porkchop 3D” was shot in the backwoods of West Virginia on a budget of just $3000 dollars and promises one of the largest body counts of horror movie records.

The plot finds a group of vigilante kids seeking revenge against the notorious killer but when they get there they realize that Porkchop is not alone. Claiming the tag “the family that squeals together, kills together”. Check out the real D trailer for “Porkchop 3D”.  Also go to the movie Facebook Page and show it some love.