Marvel Investigating Leak Of “Guardians Of The Galaxy” Image


Well now I see why there was a rant on another website about the frickin’ Racoon getting a movie deal before some other bigger known comic hero’s. Got to be honest that I haven’t really invested much time into the comic book world other than the ridiculously uber-budgeted movies that come out which I tend to enjoy. Beyond that I haven’t the foggiest on what happens in these worlds or to these characters. That said I have say kudos to the Latino Review for getting their hands on this concept artwork for “Guardians Of The Galaxy” slated for 2014. 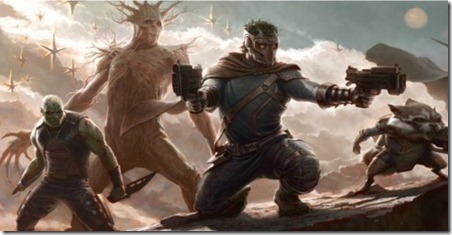 Of coarse Marvel is non too thrilled with this leak and is investigating the issue. However I feel it was probably an intentional leak just to get a vibe on how positive or negative the fans would be. These things rarely happened by pure accident. Anyway that is just my thoughts on it. Plot details for the movie adaptation where also revealed stating that “A U.S. pilot who ends up in space in the middle of a universal conflict and goes on the run with futuristic ex-cons who have something everyone wants.” According to ComicBookMovie.Com site the film has a release date of August 1st, 2014 but that may all change in light of this recent scandal at the studio. Anyway they also talk about possible “U.S. pilots” the synopsis is referring to (jump here to read about it).
Posted by A Southern Horror Fan