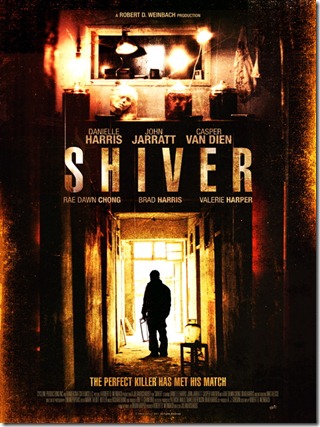 Julian Richards is about to give life to “The Gryphon” a perfect killer first brought to life by New York Times best selling author Brian Harper. The story is about a serial killer who up until now has been the perfect killer. He is about to meet his match in Wendy Alden who manages to escape his savage attack. “Shiver” stars Danielle Harris in the leading role as Wendy with an interestingly powerful cast of John Jarratt, Casper Van Dien, Rae Dawn Chong, and Brad Harris. Plus making her feature film debut is model Nikita Esco.

“Shiver” is currently in post production and has a fund campaign that is still on going at Indiegogo. The goal of the campaign is to help with finalizing post production needs, and marketing the completed film to festivals and potential buyers. Based on the trailer there should be no problem with getting this film out to the public. It looks to be an intense, edgy thrill ride and HELLO! Danielle Harris! Check out the trailer for “Shiver” below then jump over to Indiegogo to learn more about this gem. After that hit up the Facebook Page to keep up the deets on this one-I know I will be watching for it. Oh and by the way “Shiver” is now an official selection at the Burbank International Film Festival.