Check Out The Trailer And Poster For “Apocalyptic: The Tsunami War”


“Apocalyptic: The Tsunami War” just released from Tomcat Films. Check out the poster and trailer below after the long synopsis. 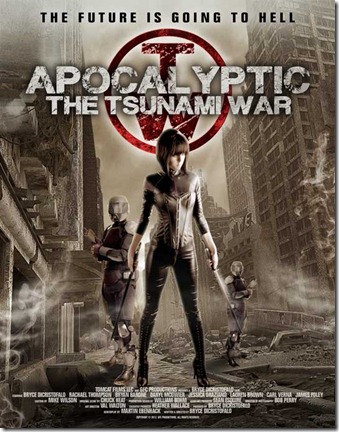 Extensive Synopsis:
The year is 2014. The face of the planet has been altered and reshaped after a Mega-Tsunami, the likes of which the world has never seen. After ripping through the Caribbean, Cuba and most of southern Florida have been completely wiped off the face of the earth. The wide spread damage has even left Central Florida isolated and cut off from the continental United States. Orlando is now a wasteland, a lawless shadow of the prosperous community that thrived before the devastation. It’s survival of the fittest as gangs and ruthless thugs control the streets.
Ash Singer is an ex-gang leader with a heavy past who arrives back in town after running away from his problems. From becoming an orphan at an early age to witnessing the death of several of his close friends, his life is fraught with pain and suffering.
With his arrival come different reactions. Some welcome him with open arms such as his life long friend Sarina Amador, Ash’s beautiful life long friend with a heart of gold, and Unke O’Connor, Ash’s surrogate father. Some greet ash with distain such as Ash’s best friend Mickey O’Connor, whose stubbornness is only overshadowed by his biceps. And some greet Ash with vision of a dark future.
Kyoko Waed Collins is a dark sultry psychopath who, like Ash, returned to Orlando to start a new life in the wake of the destruction. Only Waed isn’t seeking the quite solace that Ash searches for. Power is her only comfort and she won’t stop until the city is under her total control.
This puts ash in a quite predicament. He knows just what waed is capable of but he also knows the power of the uncontrollable beast, which sleeps inside him. He promised himself he would never do harm again. But when push comes to shove, will he crumble in defeat? Or will he rise and persevere through the fight of his life?