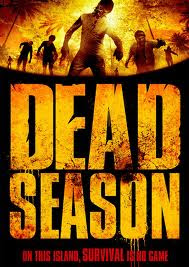 
They attempted to escape the madness of the undead only to find the insanity of the living. On July 5th, Image Entertainment drops you into a gruesome zombie-infested island with Dead Season. True to the raw claustrophobic hysteria of zombie survival horror, Dead Season comes at you on July 5th On Demand. It will be released on DVD July 31st for an SRP of $27.97.


When a worldwide viral outbreak leads to a plague of zombies, two survivors flee the chaos of America to a remote island, hoping for a chance to start a new life. What they find is unrelenting horror. Beyond the hordes of the flesh-hungry undead, the other people already on the island force the pair into a fight-or-die battle amongst themselves. Armed only with crude weapons, they must descend into savagery and cutthroat tactics just to make it through each day. Packed with cutting-edge action and insane gore, Dead Season is a riveting new spin on the zombie genre!