Check out the newest image released for "Terrifier 2" on the film's Facebook page. 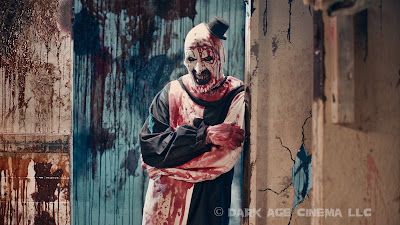 Daniel Leone's sequel is still wrapping up. The film stars David Howard Thornton as Art the Clown. Lauren LaVera has been cast as the film’s lead. It costars are Tamara Glynn (Halloween 5: The Revenge of Michael Myers), Felissa Rose (Sleepaway Camp) and Jason Lively (Night of the Creeps).

After being resurrected by a sinister entity, Art the Clown returns to Miles County where he must hunt down and destroy a teenage girl and her younger brother on Halloween night. As the body count rises, the siblings fight to stay alive while uncovering the true nature of Art’s evil intent.
Posted by A Southern Horror Fan