My Review Of "Abominable" 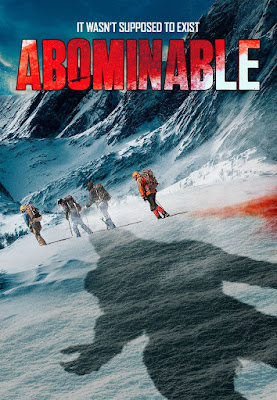 "Abominable" is a sci-fi, creature feature directed by Jamaal Burden. The film stars Robert Berlin and Katrina Mattson. It is a ultra low budget movie that brings back the "man in a monster suit".

A research team embarks on a journey to obtain a plant that can advance medical research by centuries. While stumbling upon clues of the previous expedition, they discover that a Yeti creature lurks within the Himalayan mountains and will do anything to protect its terrain.

"Abominable" is really low budget and a lot of the continuity seems muddled with poor production choices. I never like to come out and say a movie is bad, A lot of work and heart goes into movie making, even the low budget projects so I feel every film deserves a once over.

With this one, it was hard to get into the story, and the story isn't a bad one. A science team seeking to uncover the miracles of a special plant, reminiscent of the classic "Werewolf Of London". A yeti that is guarding the location and vicious enough to kill any and all who trespass. It is a cool story. Unfortunately there is just a lot that goes wrong.

Poor editing, the sound effects, and really bad shots of the creature that shows the suit is way to big for the actor wearing it. Now minus the "gamer" level CGI, I do give props to some decent practical effects moments. But there just isn't enough going on in "Abominable" that works out right. (2/5)
Posted by A Southern Horror Fan