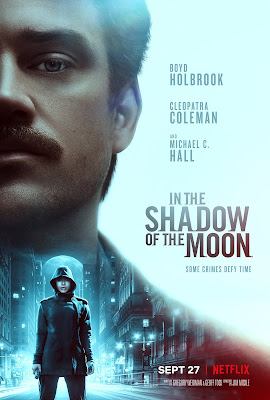 The first official trailer has been released for Netflix's serial killer sci-fi "In The Shadow Of The Moon". The film premieres on the streaming service September 27th. It is directed by Jim Mickle. With Boyd Holbrook, Michael C. Hall, Bokeem Woodbine, Cleopatra Coleman.

In 1988, a police officer is hungry to become a detective and begins tracking a serial killer who resurfaces every nine years. But when the killer's crimes defy all scientific explanation, the officer's obsession threatens to destroy everything.


.
Posted by A Southern Horror Fan